The Trainee of the Year Award is the highest accolade bestowed upon a Victorian trainee who has demonstrated exceptional commitment and achievement through the course of their traineeship. 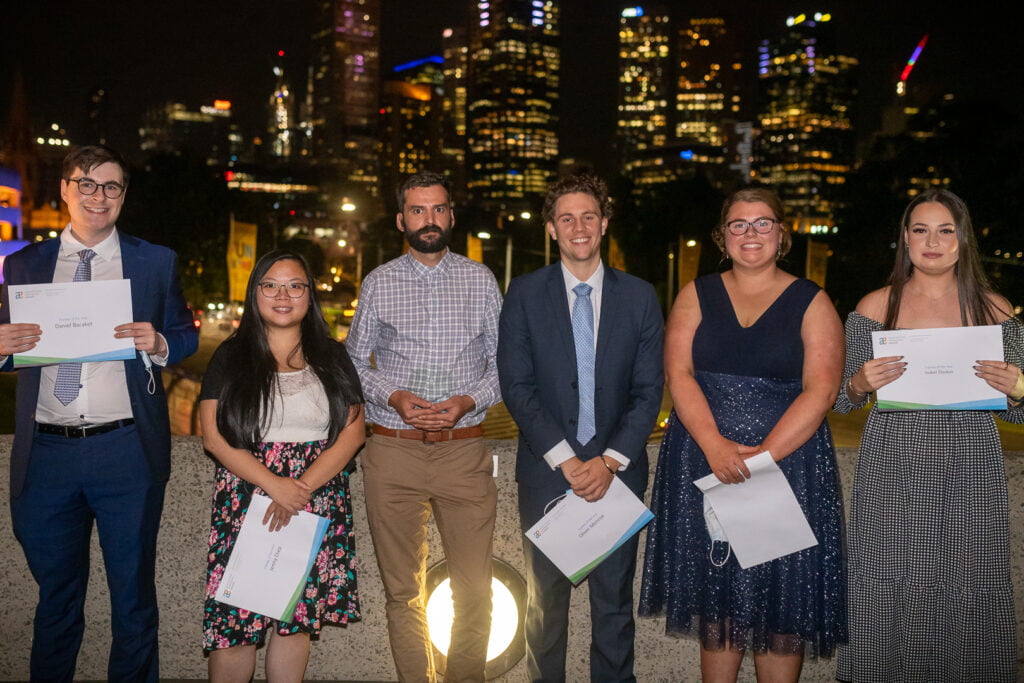 Nastassja chose a business traineeship as she hopes go own her own business one day and thought it would be beneficial to learn the operations. The traineeship has had a big impact on Nastassja both professionally and personally. Read more.

As an apprentice plumber, Rodney’s first encounter with Barwon Water led him to realise that he wanted to work with them.  Sometime down the track, when a traineeship arose at the company, he jumped at the opportunity. With 7 years’ experience working in the plumbing industry, Rodney has been able to bring that skillset and knowledge to his workplace.  His ideas and perspectives have been greatly supported by his team and he has grown as an individual. Read more.

Katharine loves the environment and working outdoors, so she decided on a traineeship in arboriculture. She was the first female trainee hired in her place of work, Maroondah City Council. Katharine has been able to overcome experiences with members of the public, who, at times, view her as being incompetent because she is a woman. She has engaged in learning on weekends with external arborists – she feels this will assist her with her future studies. Read more.

Ashleigh’s passion for assisting students within a school environment was the driver of his career change. Ash joined Mount Clear College in 2019 completing his Certificate IV in Education Support whilst fulfilling his role of Sports Coordinator Assistant. He had coached cricket for many years but found that teaching students was different working with students in a school environment. He was tested in his ability to keep students engaged for a full day rather than a coaching period. Ash also found students could test his knowledge and abilities and the importance to be prepared. Read more.

Lucy has brought an undeniable vibe to her host employer, Telstra, which has helped develop a great working atmosphere and culture. Lucy delivered a speech to Indigenous school girls at a large Telstra store describing her vulnerabilities when she first started her traineeship and the positive growth and development she has experienced since. Being a fulltime foster carer for her cousin’s two toddlers has not stopped Lucy being able to complete her traineeship. She was also nominated for AFLSR Trainee of the Year 2018 and was a Top 3 Finalist for Trainee of the Year at the Victorian Training Awards. Read more.

Merinda commenced her traineeship with NECA after completing her year 12 studies, she commenced working at the Department of Justice and Regulation in the HR department. In a short period of time, she excelled in her role, developing excellent communication skills, & quickly adapting to a changing environment. Read more.

Ashley completed a school-based traineeship in community services work whilst attending Matthew Flinders Girls Secondary College in 2015.  Ashley went about her training and work placement in a quiet, unassuming manner.  She always contributed in class and encouraged others at the Gordon TAFE. Read more.

At the age of 16, Symantha McGrath was a young school drop out, hanging around with “the wrong crowd” after growing up in a very unstable environment. As a child Symantha had no adult role models or peers that were in any form of employment, key adults around her were drug affected, and as a result, she had to move homes and  transition through different guardianship arrangements, often wagging school and missing out on her education. Read more.